An aspect of the Warbirds RPG that I enjoy is that the mercenary characters get to choose from their missions. The rules state that the GM should have the Guild Agent present a few contracts to the pilots at the conclusion of each adventure. The group chooses which mission to accept. This is great for me because it spreads the control around between players and GM.

As GM, I'm the one presenting the options, but the players get to choose which one to take up. After they make their choice, I can take my time fleshing out the scenario that I know they picked for themselves.

I took this concept a bit further, and came up with Mission Cards. 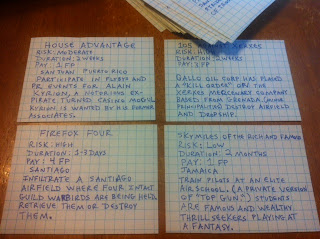 I took a bunch of index cards, cut them in half, and wrote short teasers on each. They include a title, a risk level (low, moderate, moderate / high, or high), the pay, a location, and a brief two or three sentence summary of the contract. (About 40 missions.)

I made forty for my initial Mission Deck, and I added in a number of routine tanker escort missions, which are the Guild's bread and butter, but are fairly boring, and Air Race and Air Show Cards. If an Air Race or Air Show Card is drawn, there is a simple random chart on each for the location, and they aren't intended as missions, but invitations to races or shows that can be played out as brief side-stories before the next mission. (The usual Guild rules about one race and one show per pilot still stand, and I only expect a single pilot from the group to enter any particular race or show.) 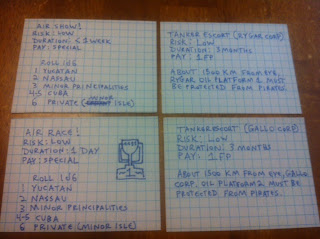 Finally, I put a few Special Cards in my Mission Deck, that have effects on other cards: 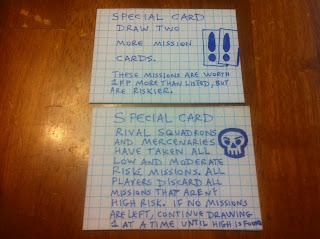 One card calls for two more missions to be drawn, but the risks and rewards of each will be escalated, and the other is a card which says that all low and moderate risk missions must be discarded. If no high risk missions are left, continue drawing until one is drawn and it is the only contract on offer.

It's my intention that this is a "living" deck, so I will continue to add and remove cards each week. For example, accepting some contracts may remove others, or set up sequel missions.

I got to use them last night for the first time. I told the players about them before the game, and explained that if they succeed in their mission, they will draw one each, and one more for the Guild Agent herself. Since there are four pilots, this would mean that five cards would be drawn.

However if they did not succeed in their contract, the pickings would be slim so the group would draw one card collectively, and one more for the Guild Agent, for a total of two.

So if the current mission is successful, they get five cards to choose from, and if they fail, they get only two.

It was a blast, the players got to select from five and the silly titles on the cards made it more fun.

Email ThisBlogThis!Share to TwitterShare to FacebookShare to Pinterest
Labels: Warbirds