The Gold Standard, An Equipment Guide 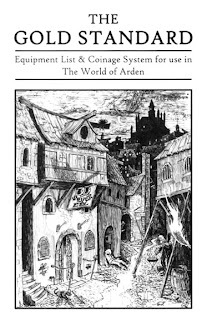 When I started prepping my newest campaign, the World of Arden, I asked my players what all they would like to see. Two things were brought up, the first was the suggestion that we use the Silver Standard instead of the Gold Standard for equipment prices. The second was a request to use pounds instead of stones for calculating encumbrance. I knew making these changes from the rules as written would confuse some players when trying to convert on the fly if using the standard book equipment lists. To remedy that I started work on a small booklet called The Silver Standard.

About a week before the game was to start it was suggested that maybe we go ahead and stick to using the gold piece as the default coin rather than shifting to silver. Well, at that point I had all but completed the booklet. So I went through and converted everything back over to gold as the standard while leaving the weight in pounds; that was something they still wanted, so I ended up with The Gold Standard.

Now, this isn't a pure conversion. I added a few sets of armor, changed prices for armor to fit how I pictured it working in my world; namely plate mail and other heavier armors cost more than originally listed in the ACKS book. Also, I made an adjustment to the damage heavy crossbows dealt and the ranges of composite bows. Those were the big changes from the rules as written.

The link below takes you to the 8.5" x 5.5" booklet sized PDF. I've found this size works very nicely for those in my group who use iPads and tablets.